At the suggestion of local political figure Simon Lau, I watched the Brexit movie last night.  What?  Well, in the current political climate here, there almost isn't anything left that hasn't somehow been sucked into the 11-week long altercation between the Gahmen, and the people, including Rev G.  Predictably, FB worked out my political stance and fed me content I would want to consume, so I found myself clicking on to Simon Lau's talk show, and fascinated by the clear-headed-yet-fervent analysis of the then 7th week progress of the city-wide brawl, all done in Canto-vernacular that I did not always follow.  Nevertheless, hearing it in local tongue gave me a visceral connection, however loose, with the heartbeat of the movement of protest.  I have never worked so hard to read / listen/ understand, and hence to be somehow in vicarious touch with those interfacing with the police (as the arm of the Gahmen) in increasingly bellicose fashion, with a rising and mostly one-sided casualty count.  There are reports in English, and I consume those too, but often find it's the Canto news, opinion pieces or stories that convey the depth and intensity of feeling that is fueling the momentum of a protest that in its 3rd month is now, still, garnering fresh endorsement from large segments of professional and civic life.  Here's one from today.

Life is changing in little ways.  K and I have our ears and eyes constantly open for any news about how the war is going — which side has had a win here or there.  It feels a little like war widows finding out how their boys are going, even though we don't know anyone personally on the so-called front lines.  Every morning, I put feelers out for a trifecta of information: English media news, usually the morning post or free press, then whether Simon Lau and his mob have a commentary on the latest, and lastly, the protestors' bulletin board for artwork, posters and where the next events will be.   The sheer weight of time, energy, logistics, inspiration, innovation and creativity that has been brought to bear on this relentless message to a sitting Gahmen, albeit unheeded, is staggering.  That being so, the Gahmen's unyielding responses to the message is in turn even more staggering. 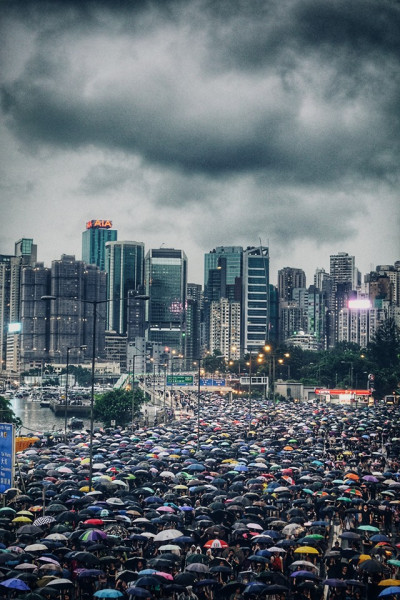 By my reckoning i.e. fast, loose and probably conservative, there have been at least 3.5million attendances on the street.  That's equal to at least half the ENTIRE population.  Amreeka and their convoluted voting system should be so lucky to have such an engaged constituency.  There has been no shortage of op-ed pieces attempting to disentangle the bafflement with which most people are left with, when they survey the carnage of the last 3 months, and set it in the context of what is being asked of the Gahmen i.e. seemingly very little by comparison.  The latest example of how deeply dug-in this Gahmen is, is a mini-budget out of the blue, that touts an extra 19 billion in payouts to win (buy) back support for a flailing government.  So, they'd rather find an extra 19B to give away, than make concessions to protesters that number more than half the working population, and who also happen to be the vaunted future of the nation.  Baffled, right?

Also noteworthy, has been the mini verse response to the affair.  The long-standing attitude of Bec&Col toward organised protest / demonstration has been one of mild ridicule.  This came out in the fabicon years, when Frank&Cat characterised  the spectacle of street protest as one of unhealed wounding i.e. if you had proper childhood development in expression of emotion and thought, you wouldn't need to take to the streets in order to feel heard.  It always struck me as a statement borne of not ever having to feel voiceless.  They also teach, somewhat paradoxically in this context, that the function of anger is to propel one to action.

So, in our meetings we pray continuously for the country, dissuade anyone from joining the protests, deplore all violence, and get this — repent of anger that came by way of witnessing on social media all that transpired on the streets this summer.  Hmmm.     We are angry, we are hurt, we feel oppressed and violated.  Is the only response to give it to God and trust He is sovereign?  What if, all the things that you are feeling, is His way of propelling you to action?  How are we not moved?  Kudos to all who found a way to act.  To act is the proper response.  Choosing how to act is a different decision, and not at all prescribed.  To deliberately step back from acting, is to wound yourself in the spirit.  I know that our Lord is not neutral in this.  Therefore we ought not to be.  As His people, do we know his heart and will we speak and act in it?

Brexit was interesting, but I think mostly because it is somewhat relevant to what the times are on this fantasy island.